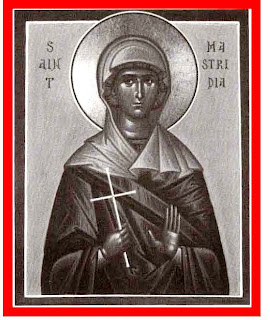 Mastridia of
February 7th
When the foolish young man continued to challenge her virtue, she realized that she would have to change her life completely, in order to avoid offending God with sinfulness.
She did not hesitate to do so.
Because the valorous Mastridia of Jerusalem was a woman of supreme integrity and spotless character, she was perfectly willing to disrupt her life so that she could remain blameless before the Almighty.  And disrupt it she did – by leaving the city and taking up permanent residence in the great deserts of the .
It happened during the last years of the Seventh Century A.D., under the rule of the Byzantine Emperor Maurikios, when this pious virgin discovered to her horror that a young male friend harbored lustful desires for her.  As quickly as she could, St. Mastridia let him know that his advances were not only inappropriate, but also deeply offensive to her.  Again and again, she implored him to control his passions and leave her in peace to contemplate the Lord.
To her sorrow and her great disappointment, however, the headstrong youth continued to persist in his wanton ways.  Finally, the holy Mastridia understood that she had no choice.  In order to spare them both from the danger of sinning against the will of the Almighty, she quickly gathered a few provisions and set out for the sandy wastes that flanked the River Jordan.

She left with only the clothes she was wearing – and while carrying a leather sack that she had filled with soaked beans.  Unafraid of the wolves that howled from the mountain crags around her, and unconcerned about what would happen when her little bag of food ran out, she plunged headlong into the unknown.  Because she trusted so deeply in the God she worshipped day and night, this courageous pilgrim found the strength to confront every danger and every difficulty with a smile. TAKEN FROM
St. Mastridia possessed no money and no other belongings.  And yet she managed to survive for the next seventeen years in this fashion, while endlessly wandering the wilderness as an ascetic who found great joy and peace in giving up the pleasures of this fallen world in order to obtain a glimpse of the next.  Day after day, as she drifted across the vast and trackless regions of waterless desert, Our Holy Mother Mastridia exulted in the fact that she had escaped from the feverish assaults of her foolish admirer.
How she treasured this opportunity – while living alone beneath the blazing desert sun – to focus on the Holy Gospel of Our Lord Jesus Christ, and to witness the mystical visions that were so beloved of the ’s Desert Fathers.
Although the annals of the early Church contain few reports of female ascetics who chose life in the desert, the story of what happened to the blameless Mastridia shows clearly that virtuous hermetical living was not the sole province of male contemplatives.  Indeed, her austere habits and stern self-denial fully matched those of her male counterparts – a fact which has inspired many Church Fathers over the years to recall a powerful epigram from St. Paul in his Epistle to the Galatians: There is neither Jew nor Greek, there is neither slave nor free, there is neither male nor female; for you are all one in Christ Jesus.  (Galatians 3:28)
While pointing out that “gender differences” have nothing to do with the way that Almighty God loves and judges each of us, the Great Apostle also noted in his Epistle to the Ephesians: There is one body and one Spirit, just as you were called in one hope of your calling; one Lord, one faith, one baptism; one God and Father of all, who is above all, and through all, and in you all.   (Ephesians 4:4-6)
Obedient to God from beginning to end, this valiant and chaste young woman would spend many years in isolation, dreaming of the celestial Bridegroom whom she had chosen over mortal men, and of the eternal blissfulness she expected to enjoy with Him at the end of time.
As the weeks turned into months and the months turned into years, this passionate desert-wanderer was amazed to discover that her clothing had not begun to wear out.  In spite of the dust, the heat and the rain, her simple garb remained spotless and without wrinkles!  After more than seventeen years of wandering the mountains and deserts by daylight and then sleeping on the ground, the loyal Mastridia’s clothing seemed fresh and spotless.
Even more remarkably, her supply of basket-borne soaked beans did not appear to be running out!  Each time she stopped in her travels to consume a bit of the only food she had carried out of , it replenished itself in front of her eyes.  In His great love and kindness, the Good Lord did not allow his servant to go hungry during her endless journeys back and forth across the deserts of !
After many struggles that have endeared her to the Holy Fathers for nearly fourteen centuries, Our Holy Mother Mastridia of finally went to her rest around 580 A.D., under the reign of the great Emperor Tiberius.  In spite of her hardships and her fatigue after so much grueling travel through inhospitable climes, St. Mastridia had kept her vow of chastity to the only man who truly mattered in her life: Our Lord and Savior, Christ Jesus.
She had also demonstrated that the life of a desert ascetic could be lived just as faithfully and prayerfully by a determined female contemplative as by any male monk of the wilderness!  In her patient acceptance of the wearisome toil and the sharp discomfort required for this glorious vocation, St. Mastridia reminds us of ’s important insight: The Father of us all does not concern Himself with the gender of his devotees – but with the character of their souls, which are neither male nor female.
Apolytikion in the Eighth Tone
In thee the image was preserved with exactness, O Mother; for taking up thy cross, thou didst follow Christ, and by thy deeds thou didst teach us to overlook the flesh, for it passeth away, but to attend to the soul since it is immortal.  Wherefore, O righteous Mastridia, thy spirit rejoiceth with the Angels.
Kontakion in the Eighth Tone
For love of God, O righteous mother Mastridia, thou didst spurn the need for rest. By fasting thou didst make thy soul luminous and didst utterly defeat the beast. By thine intercessions do thou destroy the snares of the enemy.
X
Posted by Almoutran at 2/02/2011 07:56:00 PM