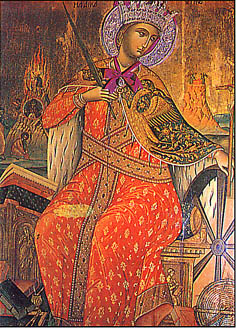 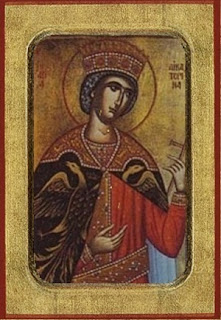 Great-Martyr Catherine
the All-Wise of Alexandria

November 25th
At first glance, she seemed to be a beautiful princess in some golden fairy tale.
She was a lovely young maiden, everyone agreed – but also chaste, modest in her habits, and quietly steadfast in her faithfulness to her Lord and Savior, Jesus Christ.
Who would have guessed – meeting the youthful Catherine of Alexandria, a maiden of aristocratic bearing and lineage – that she would end her life while being tortured on the spikes of an iron wheel, and then ruthlessly beheaded?

The story of Catherine the All-Wise began in that great Egyptian center of learning, Alexandria, where she was born around 287 A.D., as the daughter of a wealthy nobleman named Constas (or Cestus, according to some historians). Raised in a setting of privilege and luxury, the young St. Catherine soon became adept at rhetoric and philosophy. But her heart would belong to the Lord Jesus Christ, and not to mere books, after she was converted to the Christian faith by her pious and devoted mother.

Already strong, St. Catherine’s faith grew even deeper after she prayed through the night before an icon of The Theotokos and Jesus . . . and then watched both of them materialize in a dream. The young girl was amazed, but also disheartened when the Holy Redeemer seemed to avoid her eyes, while noting that she was unworthy.TAKEN FROM
After reviewing this strange dream with a holy man (he recommended prayer and fasting), she experienced the vision a second time. But this time the Lord God appeared
Read More
Posted by Almoutran at 11/22/2011 06:01:00 PM 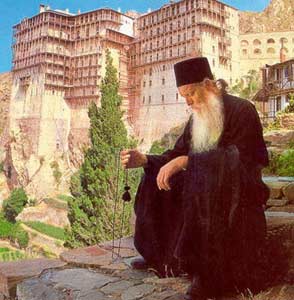 The Angels
By Nabil Semaan*
FEAST OF ARCHANGELS 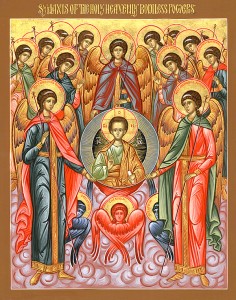 On the 8th of November, the Orthodox Church celebrates the feast of synaxis of the Archangels Michael and Gabriel and the rest of the archangels. The word synaxismeans the gathering of believers to celebrate a feast, or to make a remembrance of a saint. This feast also has a special meaning; it is the gathering of the humans with the angels, "their union, their gathering and standing in fear in front of the creator."(1)After the fall of the devil and his angels, this feast is the celebration of "sobriety and unity" of the rest of angelic powers who stayed loyal to God. "We celebrate also the contribution of the angels and archangels and their help and support in the war against the dark powers and the devil."(2)  READ MORE
Posted by Almoutran at 11/02/2011 10:02:00 PM

Advice on peacemaking from the Saints
Do you wish to honor the Body of the Savior? Do not despise it when it is naked. Do not honor it in church with silk vestments while outside it is naked and numb with cold. He who said, “This is my body,” and made it so by his word, is the same that said, “You saw me hungry and you gave me no food. As you did it not to the least of these, you did it not to me.” Honor him then by sharing your property with the poor. For what God needs is not golden chalices but golden souls.
–St. John Chrysostom / “On the Gospel of St. Matthew”, 50, iii (PG 58, 508) READ MORE