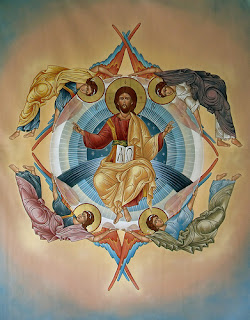 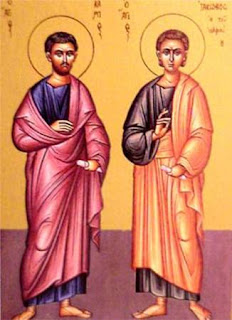 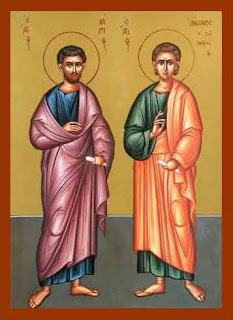 Apostles Carpus and Alphaeus of the Seventy
May 26th
When the hilltop suddenly split open, creating a yawning and dangerous cliff, the Holy Apostle feared for his life!
Would St. Carpus – one of The Seventy disciples chosen to preach the Gospel of Jesus Christ – be flung screaming into the abyss that had just been created by the earthquake?
The life-and-death struggle of this close companion and follower of the Great Apostle, , took place around 70 A.D.  For St. Carpus, the sudden earthquake would trigger a desperate struggle to keep from being swallowed up by the ground at his feet.  Yet it would also provide him with the greatest spiritual lesson of his entire life!
The dramatic incident occurred during a period in which the saint and future martyr had been praying angrily to God to destroy two vile sinners.  These two shameless miscreants were seducing and perverting many of the young people who lived on the of , where St. Carpus had been dispatched to preach the Holy Gospel by .

For the deeply pious and God-fearing St. Carpus, who had been appointed by St. Paul as Bishop of Borea in the region of Thrace (today part of both Turkey and Greece), sinful behavior of the kind he was witnessing daily on Crete was utterly unacceptable.  A deeply spiritual man, St. Carpus frequently experienced visions from on high – a fact that deeply impressed his best friend on Crete, St. Dionysios the Areopagite, who often visited the envoy of at his island home there.  TAKEN FROM
Read More
Posted by Almoutran at 5/23/2011 11:32:00 PM 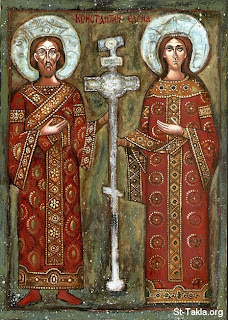 Email ThisBlogThis!Share to TwitterShare to FacebookShare to Pinterest
Labels: Saints
Equals-to-the-ApostlesEmperor Constantine and his Mother Helen
May 21st 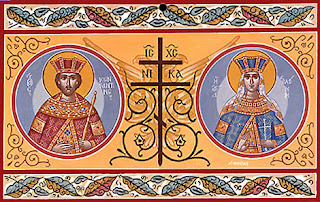 It was a moment of destiny – a moment that would truly change the history of the entire world.
It happened in the Year of Our Lord 312, not far from the Eternal City of Rome, when one of the greatest saints of the Holy Christian Church looked up from his horse and saw an amazing apparition taking its shape in the midday sky.

Suddenly, the great Emperor (272-337 A.D.) St. Constantine was gazing upon an immense cross of white-hot fire! Yanking on the bridle of his war-horse, he pulled the animal to a stop. Behind him, the vast army of Roman soldiers that had been marching toward a battle that would decide the future of the largest empire in the history of the world slowed to a crawl and then stopped moving.
TAKEN FROM
Surrounded by his anxious lieutenants, the Western Emperor of Rome could hardly believe what he was seeing. What was the meaning of this blazing cross, which now seemed to fill the entire horizon, sending beams of radiance as far as the eye could follow? As he studied the miraculous phenomenon, five history-making words slowly glimmered into view beneath the blazing cross: 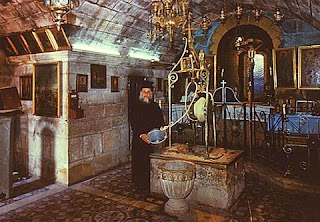 Email ThisBlogThis!Share to TwitterShare to FacebookShare to Pinterest
Labels: Pascha

Sermon on the Samaritan woman
Metropolitan Anthony Sourozh
8 May 1988
In the name of the Father, the Son and the Holy Ghost
The Holy Gospel has not given us the name of the Samaritan woman. But the Tradition of the Church remembers, and calls her in Greek - Photini, in Russian - Svetlana, in the Celtic languages - Fiona, in Western languages - Claire. And all these names speak to us of one thing - of light.
Having met the Lord Jesus Christ she has become a light shining in the world, a light that enlightens those who meet her. Every Saint is offered us as an example; but we cannot always emulate the concrete ways in which a Saint lived, we cannot always repeat their way from earth to heaven. But we can learn from each of
Read More
Posted by Almoutran at 5/17/2011 10:35:00 AM 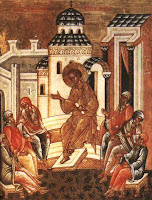 5
Mid-Pentecost
From Wikipedia, the free encyclopedia
Mid-Pentecost or Midfeast is a feast day which occurs during the Paschal season in the Eastern Orthodox Church and those Eastern Catholic Churches which follow the Byzantine Rite.
Mid-Pentecost celebrates the midpoint between the Feasts of Pascha (Easter) and Pentecost. Specifically, it falls on the 25th day of Pascha.
Mid-Pentecost is a one-week feast which begins on the 4th Wednesday of Pascha, and continues until the following Wednesday. That is to say, it has an Afterfeast of seven days. Throughout these eight days (including the day

FROM PASCHA TO PENTECOST
By
Protopresbyter Dr. George D. Dragas 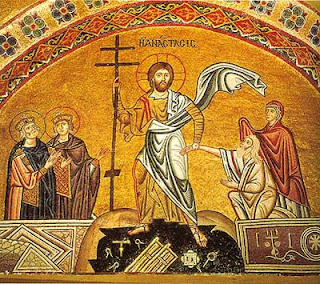 1. The Pentecostal Period. The word, Pentecost means “the fiftieth” and is used to designate the great event of the Outpouring of the Holy Spirit (Epiphoitesis) upon the Apostles and the Church on the 50th day after the Resurrection of Christ, just ten days His Ascension into Heaven.
Before His Passion, the Lord spoke to his Disciples about the gift of the Holy Spirit, which they were to receive after the Ascension. The details are preserved in the Gospel of Saint John: “I will ask the Father to send you the Holy Spirit who will defend you and always be with you” (14.16). He also said, “The Holy Spirit can not come to defend you until I leave. But after I am gone, I will send the Spirit to you” (16.7). After His Resurrection, the Lord appeared to the Disciples, and He said to them, “Receive the Holy Spirit” (20.22). This was a foretaste of the Outpouring (Epiphoitesis) on Pentecost Sunday.
Read More
Posted by Almoutran at 5/13/2011 07:00:00 PM 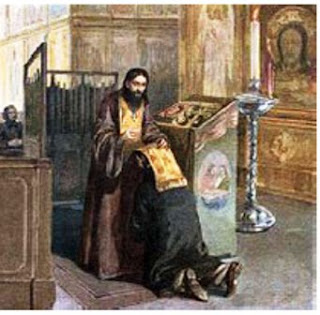 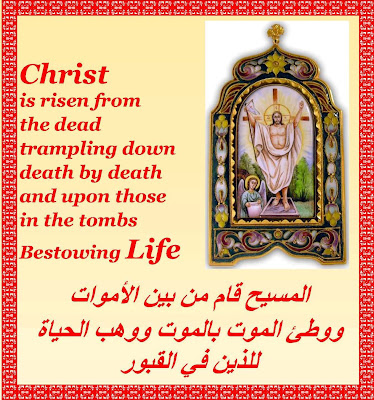 Email ThisBlogThis!Share to TwitterShare to FacebookShare to Pinterest
Labels: Pascha 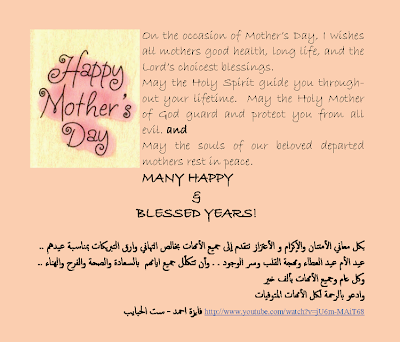