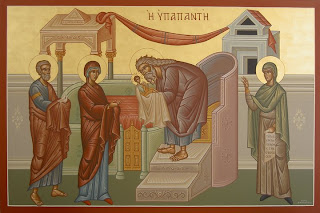 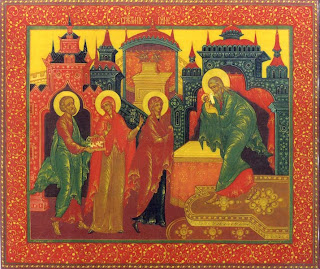 OF OUR LORD IN THE TEMPLE
The fortieth day after His birth, the All-Holy Virgin brought her Divine Son into the Temple of Jerusalem, in accordance with the Law, to dedicate Him to God and to purify herself. "Consecrate to me every first-born that opens the womb among the Israelites both of man and beast, for it belongs to me" (Exodus 13:2). "Tell the Israelites: when a woman has conceived and gives birth to a boy, she shall be unclean for seven days, with the same uncleanness as at her menstrual period. On the eighth day, the flesh of the boy's foreskin shall be circumcised, and then she shall spend thirty-three days more in becoming purified of her blood; she shall
Read More
Posted by Almoutran at 1/30/2012 10:27:00 PM

Ephrem the Syrian; his       innovations transformed religious services.
Ephrem the Syrian was not really a Syrian. A famous hymnwriter and Bible teacher, he was born in Mesopotamia between the Tigris and the Euphrates rivers, and lived most of his life in Edessa which is in modern Turkey.
Good parents gave him a jump start on faith. They trained him to fear the Lord and both suffered for their faith. He later wrote, “I was born in the way of truth; and though my boyhood did not understood the greatness of the benefit, I knew it when trial came.”
In 337 after Constantine the Great died, Sapor, king of Persia, seized the opportunity to invade Mesopotamia. He besieged the city of Nisibis where Ephrem was staying, and in 70 days brought it to the verge of surrender. But Ephrem talked the city’s old Bishop James into mounting the walls to pray for the Divine help. Soon afterward, swarms of mosquitoes and horse-flies made Sapor’s horses and elephants unmanageable, and the king withdrew his forces. After that, Ephrem moved to Edessa.
Untrained in any skill and without any other means of making a living, Ephrem became a bath-keeper. In his spare time he was a missionary, teaching and reasoning with the natives. An old monk overheard him witnessing, told him that it was wrong for him to mix with the world, and convinced him to live in a cave, starve himself and study Scripture. Ephrem began writing books, disciples gathered to learn from him and went home to teach others. 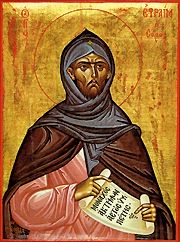 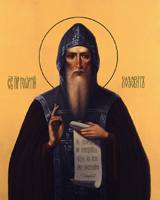 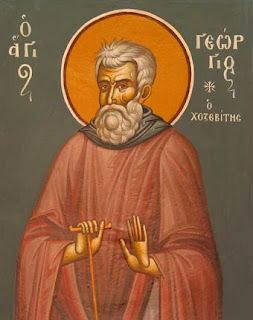 January 8th
He sewed rags together in order to make his clothes, and his meals consisted of dried leftovers from the community kitchen that he ground into thick, tasteless cakes. Disdaining oil, butter and wine, he lived what some Church historians believe may have been the most ascetic life of any monk who ever belonged to the Holy Church.

Venerable George the Chozebite, a native of Cyprus, left his native village after the death of his parents and entered a monastery in Palestine with the permission of his guardian-uncle. Here, at the highly regarded Hozeva Monastery located between Jerusalem and Jericho, the youthful contemplative would amaze his fellow monks with his fiery zeal and his determination to give up all forms of comfort and pleasure for the greater glory of God.

Venerable George, who would one day become the abbot of his own monastery, set a high standard for self-denial, while often remaining in a standing-in-position vigil throughout the night and going for days at a time without food. Rather than becoming weakened and frail as a result of these ordeals, however, he became stronger with each passing day. In addition, he seemed to grow increasingly joyful as his self-prescribed mortifications increased. According to the Church Fathers, Venerable George was a powerful example of the great paradox that has been encountered by many holy ascetics during the life of the Church: The more these self-denying saints deprive themselves of earthly goods and pleasures, the more contented and satisfied they become! TAKEN FROM
Read More
Posted by Almoutran at 1/06/2012 12:23:00 PM