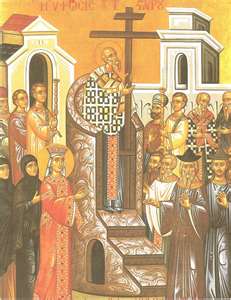 By Archpriest Leonid Kolchev
For a long time the Cross served as the instrument of a shameful punishment, exciting fear and disgust among people, but from the time that Christ sanctified it by His Blood, it became an object of pious respect and veneration for all Christians. However, this did not become universal at once. The very life-bearing Tree on which the Lord was crucified laid in the ground for many years until it was revealed to the world in a miraculous manner.
Whenever the waves of persecutions directed against Christians died down and they emerged, tormented and bloodied, from the catacombs and caves into God’s light, signing themselves with an extensive sign of the cross, then it was that Konstantine the Great, who more than once had felt the power of the Cross, decided to find the same Tree to which the Body of Christ had been nailed....READ MORE
Posted by Almoutran at 9/12/2012 10:14:00 PM